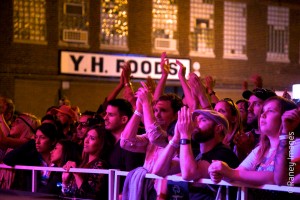 There is more intimacy at the show:

A smaller crowd at a concert sets a more intimate production for the band, in which a fan can directly interact with the band. It’s a different type of show when there aren’t thousands of people behind you singing the same words. You get to experience a small unique show not a lot of other people will get to see.

You can watch a band grow:

Those bands who you have grown to love and listen to started out somewhere, and most likely they were playing at smaller venues and street festivals. Who says a band at a small festival won’t be selling out stadiums around the country in the next few years? This is what’s so great about going to see smaller bands at your local street festival– They might blow up and then you can say you were at one of their first shows, which gives you that, “proud mama” feeling.

You might already have your favorite type of music or band, but it is always good to keep and open mind to every possibility out there. One of these bands might hit a certain spot in your music taste to later become a new favorite band you listen to on repeat.

You can meet new people with similar interests:

Bands that play at smaller venues always have their few, loyal followers. If you’re one of them, you can connect with people that have the same taste in music as you.