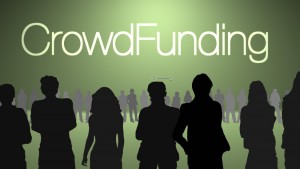 In recent years, crowdfunding has become all the rage. It started with being a helpful way for non-profits to expand their reach, gain awareness, and secure donations. However, through the last few years it has evolved from non-profits and organizations to everyday individuals trying and succeeding at obtaining monetary backing from those they know and strangers for things such as medical procedures, education, and just about anything you can think of. However, the evolution hasn’t stopped there. Now artists are jumping on the bandwagon and rightfully so to gain financial backing.

Crowdfunding has been made very simple in the last fifteen years with the emergence of websites like Kickstarter.com, Indiegogo.com, Crowdrise.com, and a slew of others. Artists use the websites as a platform to earn pledges from their fans. For example, actor Zach Braff used Kickstarter.com to raise funds to make a film. Well, the same goes for musicians. Musicians use the sites to have their fans give money in exchange for incentives. Usually the higher the monetary amount, the more lucrative the incentive. For instance, a backer may get an autograph picture for $20 and phone call for $200. The incentives can vary and be as creative as the creator. Musicians can use the money raised to finance an album, music video, or tour. Nashville based singer/songwriter, Warren Barfield used Kickestarter.com to raise funds for an independent album after leaving his major label due to creative differences. He raised his goal of $15,000 and then some to produce his last album. However these fundraisers can also be used for a musicians side project. Case in point, Nick Carter of the Backstreet Boys used Indiegogo.com to raise more than he needed for his independent film project. I personally use Crowdwrise.com to help me secure donations for the Chicago Basket Brigade I oversee for the Anthony Robbins Foundation.

If crowdfunding is for you, your band, or your endeavor, that is up to you. But whatever you use your crowdfunding page for, use it for some good and be more than generous with your incentives. In other words pay it forward.