Big names are performing in Chicagoland’s theatres, centers, and stadiums in the coming months offering a mix of contemporary and classic sounds. Summer 2021 is approaching with great haste, and Chicagoans are eager for live music that is safe and authentic to the integrity of live musical performance.  Though social distancing is still in place, Chicago’s vibrant cultural life is resuming as people head to Wrigley Field for socially distanced Cubs games and indoor dining across the city.

Although concert season this summer still won’t look normal, the following artists are at the forefront of ushering in the normalcy that Chicago, and cities across the world, are eager to see.

Celebrate Independence day jamming to the band’s fusion of Pop, Melodic Rock, Folk, and Country.  With over 10 million records sold, the Gin Blossoms are one of “the most in-demand 90’s live artists who began at the end of the grunge era”

A global superstar with 2 Grammys under his belt, Justin Bieber’s 45-date World Tour for 2021 has been significantly restructured in light of the pandemic to keep the Bieber team and fans safe. “I can’t wait to get out there and connect with my fans on this tour,” said Justin. “We’ve been through so much this year. More than ever, we’ve come to understand how much we need each other, and how meaningful these moments can really be.”  Additionally, each ticket purchase includes a $1 donation to the Bieber Foundation’s commitment to improving mental health. Buy tickets here.

Frankie Vallie and the Four Seasons:

“Oh, What a Night!”  Enjoy an evening with the Rock and Roll Hall of fame inductees and their GREATEST HITS including “Sherry” and “Can’t Take My Eyes Off You.”  The 22 destination tour is sure to attract fans across generations.

According to his website, “The 14 carefully chosen selections on American Standard naturally feature Taylor’s one-of-a-kind vocal ability and incomparable musicianship, but what makes the album so unique is the inventive way he and fellow co-producers, longtime collaborator Dave O’Donnell and master guitarist John Pizzarelli, approached the project: beautifully simple, stripped-down guitar arrangements based on Taylor’s and Pizzarelli’s skillful guitar work rather than the more traditional piano. The effect is mesmerizing.”

The No Shame Tour will feature songs from their successful fourth studio album, CALM (2020).  The 52 shows will span Latin America, North America, Europe, and Oceania. According to Billboard, No Shame is the album’s third single. The album itself reached No. 1 in the U.K. and Australia, falling short of the top spot on the Billboard 200.

Vaccinations make gathering in larger groups possible again and many are more comfortable being outside. Live musical performances are finally coming back and it’s time to look at a list of concerts that will grace the Windy City. 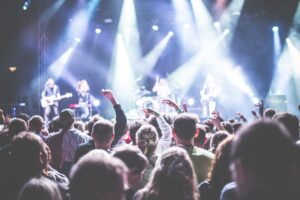